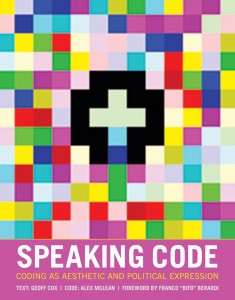 “Speaking Code beautifully folds speech and language, politics, art, and labor into an inspiring analysis. In addition to their clarity in style, Geoff Cox and Alex McLean are not afraid to get their hands dirty with references to the ugly sides of software and unsanitized code, which are too often hidden under the polished covers of contemporary design of digital culture.” – Jussi Parikka, author of Digital Contagions, Insect Media, and What Is Media Archaeology?; Reader in Media & Design at Winchester School of Art, UK

“Speaking Code incisively analyzes the forms, expression and action of computer code. In contrast to much loose and diffuse discussion of software, Speaking Code directly engages with code as utterance. Its careful exploration of code-making and code use opens onto much wider issues of power, agency and value. Theoretically nuanced and technically informed, in the precision with which it treats its materials this book really made me sit up and take notice of code.” – Adrian Mackenzie, Sociology, Lancaster University, UK

Mark C. Marino, review of Speaking Code in Journal of the Association for Information Science and Technology, June 2015, http://onlinelibrary.wiley.com/doi/10.1002/asi.23362/abstract

Can Computer Code Be Used For Artistic And Political Expression?
Interview by Michelle Lhooq, for The Creators Project, November 19, 2012.